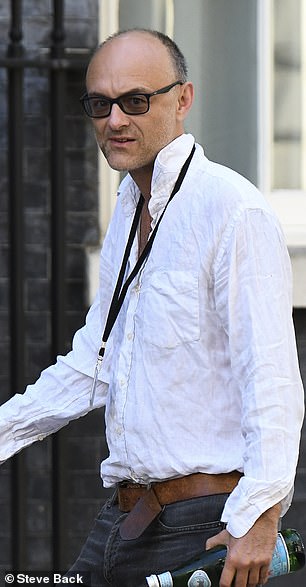 Nick Clegg, speaking as the coalition’s deputy prime minister at the time, described Dominic Cummings as ‘loopy’ and a person with an ‘anger management issue.’ Prime minister David Cameron, in 2014, spoke along the same tangent as Clegg when he described Cummings as a ‘career psychopath.’ When heading the campaign for Vote Leave from 2015-16 he couldn’t help but grate upon Sir Bernard Jenkin, an established Conservative MP and career-long Eurosceptic, who eventually spat out his dummy enough to make Mr Cummings resign from the Vote Leave board. The dispute was over Sir Jenkin’s proposed merger of Vote Leave and Nigel Farage’s Leave.EU. The merger never happened. Mr Cummings has not been one to sensor himself, either; whilst working in government he once referred to the Conservative MP and fellow leave campaigner, David Davis, as ‘thick as mince’ and ‘lazy as a toad.’ Dominic, it appears from the judgement one makes from such evidence, is not favourable toward authority, establishment nor the people who unquestionably uphold tradition; he’s not cut from conservative fabric, which makes his return to government (Cummings once advised Michael Gove – then Education Secretary – during the coalition years) as senior adviser to conservative Prime Minister Boris Johnson such a bizarre prospect.

One of the many pet projects Mr Cummings meditates over is the reformation of Britain’s primary, secondary & higher educational systems and has a whole armoury of ruffling changes he would like to make. For example, he notes that most politicians, especially of the Tory variety, received their undergraduate in PPE (Politics, Philosophy and Economics), which, in his view, is completely insufficient for the training future leaders. ‘They [PPE] encourage superficial bluffing, misplaced confidence (e.g. many graduates leave with little or no idea about fundamental issues concerning mathematical models of the economy, and they do not train people to make decisions in complex organisations.)’ Opinions like this are bound to offend and disquiet some egos within the conservative party and turn some of Mr Johnson’s MPs against his various visions of Britain. Nick Timothy and Fiona Hill, Mrs May’s chiefs of staff during the early days of her premiership through to the end of the 2017 general election, had this undesirable effect, garnering them the nickname ‘the terrible twins.’ The twins, because of their arrogant demeanours and tempers that were rarely sheathed, helped induce an isolation on Mrs May, distancing her from desirable allies. Mr Cummings certainly has been known to enact some of the same sour behaviours – he’s certainly not shy of open-handily giving offence — which could very well amount to the same isolating effect on Mr Johnson. This is not something a PM with a working majority of just one should not welcome. That working majority, however, will do until Mr Johnson sees an opportunity to solidify his premiership; probably through a general election on November 1, a day after a no-deal Brexit.

Another thing that offends Mr Cummings is inefficiency, waste and closed minded-ness, all of which he believes are encapsulated by the political class of Whitehall. ‘Look around parliament. Who are the kind of people who get ahead? People who are glib, who enjoy public speaking, who make jokes,’ he said in a 2014 speech reflecting upon his time in government. He also spoke of a political system that, in his view, ‘selects for narcissists’ and people who would play or ‘be’ the part of politician rather than ‘do.’ Whitehall, accompanied by Mr Johnson as prime minister, I imagine, is something of a dystopian reality for Mr Cummings: Mr Johnson redefines narcissism (he probably attempts to acquire two simultaneous reflections, one of his face and arse) and all the qualities that Mr Cummings rales against.

Mr Cummings basically wants to overhaul Whitehall, traditions-and-all, and intends to use Brexit as the chaotic catalyst to do so: ‘The main difficulty arises from the lack of suitable people in positions of power and the need for overturning existing power bases, which is always politically tricky,’ he writes in relation to reinventing Whitehall and continues, ‘the most likely way it will happen is, as usual, by the exploitation of crises.’ Mr Cummings, I believe, does not necessarily despise the European Union, nor does he see it as institution we must leave at all costs. Instead, I think he desires to use the envisioned Brexit disruption to create a vastly differentiated Whitehall. ‘If a group of people take over a party. . .you could actually change an awful lot, very quickly’ said Mr Cummings. He now intends to stress test that very idea.

The Prime Minister’s chief enforcer, regrettably for those of us who would seek another referendum of a defined Brexit option vs. remain, is a ruthless operator and brilliant at demolition. He is likely helping Mr Johnson complete his Brexit coup to cause an irreconcilable calamity and will then advise on a near after election campaign. Mr Johnson is the narcissistic bulldozer that Cummings intends to use as a means to his revolutionary ends. Mr Cummings knows the Prime Minister is not motivated by principle, but he knows Mr Johnson will enforce the Cummings ideology if it means the solidification of Prime Ministerial power; Mr Johnson wants to ‘be’ not ‘do,’ so Mr Cummings will ‘do’ for him. That doing will likely entail a general election scheduled for November 1. This will have the effect of recessing parliament for six-weeks, neutering any mechanism MPs had to stop a no-deal Brexit before October 31. Mr Johnson would then get to campaign without any of the background horrorcore a no-deal Brexit would surely sing. Mr Cummings will then exploit the crises that manifest and take the reigns of the next parliament.