Sam Harris has attempted to demonstrate that one’s atheism does not preclude a journey into the spiritual. Harris, however, has not turned to God for enlightenment, instead, he looks to consciousness and our capacity for experience; he believes its high time that religion be relinquished from any claim of being spiritual.

In his book, Waking Up: A Guide to Spirituality Without Religion, Harris, a neuroscientist and moral philosopher, argues that methods of meditation have the potential to steer the previously un-spiritual towards a state of enlightenment, through a better knowing of their own mind. The book is very much a mesh of memoir, scientific discussion and philosophy. 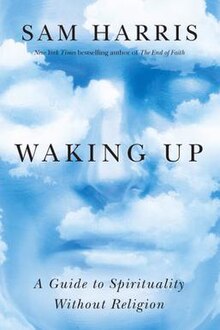 In typical Harris fashion, he begins the book with a semantic clarification and by depriving religion of the term “spiritual:” “The word spirit comes from the Latin spiritus, which is a translation of the Greek pneuma, meaning ‘breath.’ Around the thirteenth century, the term became entangled with beliefs about immaterial souls, supernatural beings, ghosts, and so forth.” Harris firmly strips away ownership of spirituality from the quacks and deities, whilst freely handing it back to methods of introspection and empiricism. He does, however, leave religion with a bread crumb, acknowledging that there could’ve been something to their insights that suggests access to altered experience: “I now knew that Jesus, the Buddha, Lao Tzu, and the other saints and sages of history had not all been epileptics, schizophrenics, or frauds. I still considered the world’s religions to be mere intellectual ruins, maintained at enormous economic and social cost, but I now understood that important psychological truths could be found in the rubble,” Harris writes, reflecting on his own MDMA induced altered state of consciousness.

After firmly handing spirituality to the realms of empiricism, Harris transitions into a provocative discussion regarding the concept of “self” and the underlying nature of consciousness. The feeling of being a stable self with an ownership of mind, Harris contends, is an illusion: “The feeling that we call ‘I’ is an illusion. There is no discrete self or ego living like a Minotaur in the labyrinth of the brain. And the feeling that there is — the sense of being perched somewhere behind your eyes, looking out at a world that is separate from yourself — can be altered or entirely extinguished.”

The experience of having a self, according to Harris, is just that, an experience and all experience requires consciousness first. Writing about a pain he had felt in his neck, Harris drives his point home: “Why is this “my” pain? Why am I the only one who is directly aware of it? These questions are a symptom of confusion. There is no “I” who is aware of the pain. The pain is simply arising in consciousness in the only place it can arise”. To Harris, enlightenment can only be achieved through transcendence of self and gaining the realisation that all experience simply appears and then disappears.

He, himself a long-time practitioner of mindfulness meditation – an exercise he defines as cultivating “a state of clear, non-judgmental, and undistracted attention to the contents of consciousness, whether pleasant or unpleasant” – recounts many autobiographical moments where he achieved such a transcendence of self. One such instance was during a trip to the Sea of Galilee: “As I gazed at the surrounding hills, a feeling of peace came over me. It soon grew to a blissful stillness that silenced my thoughts. In an instant, the sense of being a separate self — an ‘I’ or a ‘me’ — vanished…Only the world remained.”

At heart, this book is a treatise on consciousness itself, with suggestions of how to better understand this mysterious place where thoughts, feelings, sensations and anything we care about arise. Harris summarises his account and understanding of consciousness through invoking an elegant argument by analogy, writing “Imagine a mirror. Now picture an angry reflection and then a happy reflection in it. Those reflections, like feelings, come and go, while the mirror — consciousness — remains constant. Consciousness is irreducible; it’s a state of simply being, one that offers tangible benefits for those able to quiet their minds long enough to experience it.”

The most esoteric and thought-provoking texts come during the early chapters of the book and, apparently, stay there. Harris, in the latter chapters, leads us through an almost bullet pointed take on choosing the correct guru, as well as other comments that read as though they were unintegral attachments to his main thesis and surplus-to-requirements.

Harris’ latest effort is a spirited rally cry to the secular community that implores them not to fear the spiritual journey, or sneer at the term enlightenment. It is a book that is part memoir, philosophical text and guided meditation. I would suggest prereading around the concepts that appear in this book before grappling with Harris’ arguments, and would council on avoiding the back end of this text, but, other than that, it is essential reading for those interested in the exploration of the most mysterious emergence in the known universe: consciousness.